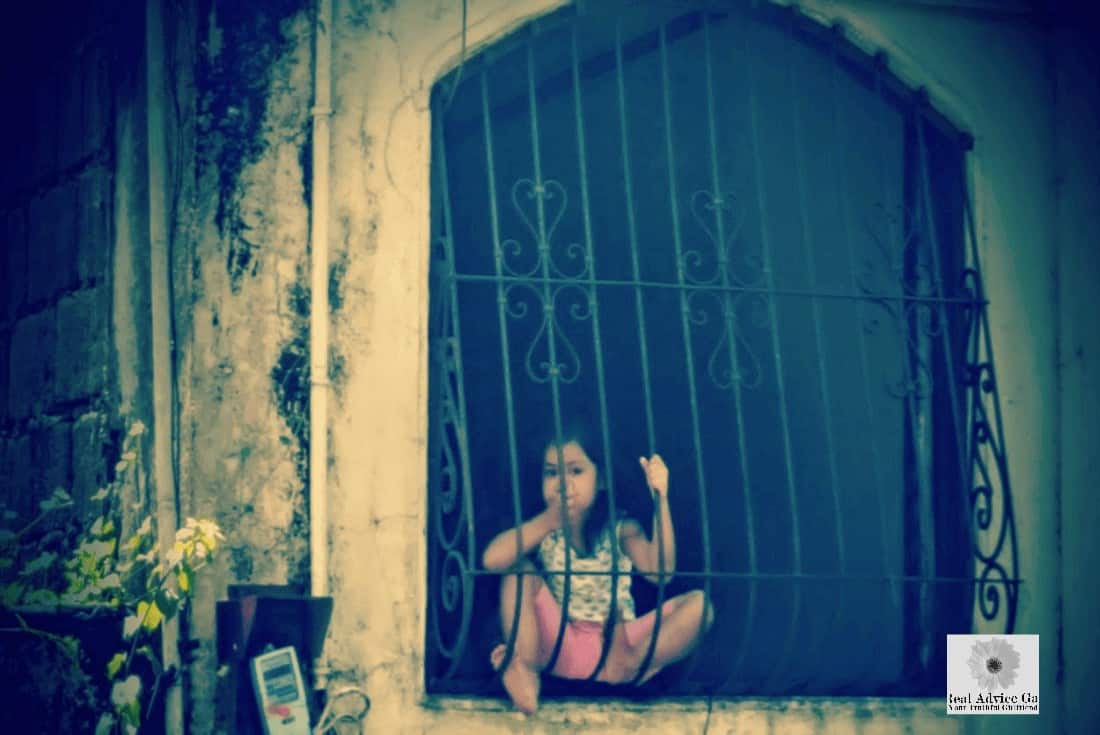 She is curious as to why I am on her street. Who am I? I smile and say, “Hello.” She smiles back and repeats “Hi, Mrs, Ma’am, Hello Miss.” I realize that she can speak English but she really isn’t sure how to have a conversation with me. She is so excited to meet me she catches herself on the ornate metal that frames the window.

We both smile and wave. It isn’t unusual to meet a friendly person in the Philippines. The recent trip I took showed me just how friendly people were.

” I am not the same after seeing the moon shine on the other side of the world”  Mary Ann Radmacher
I had the pleasure of seeing Southern Luzon portion of the Philippines as part of a press trip. I will share my journey because with every place we visit and every person we meet we become more than we were. 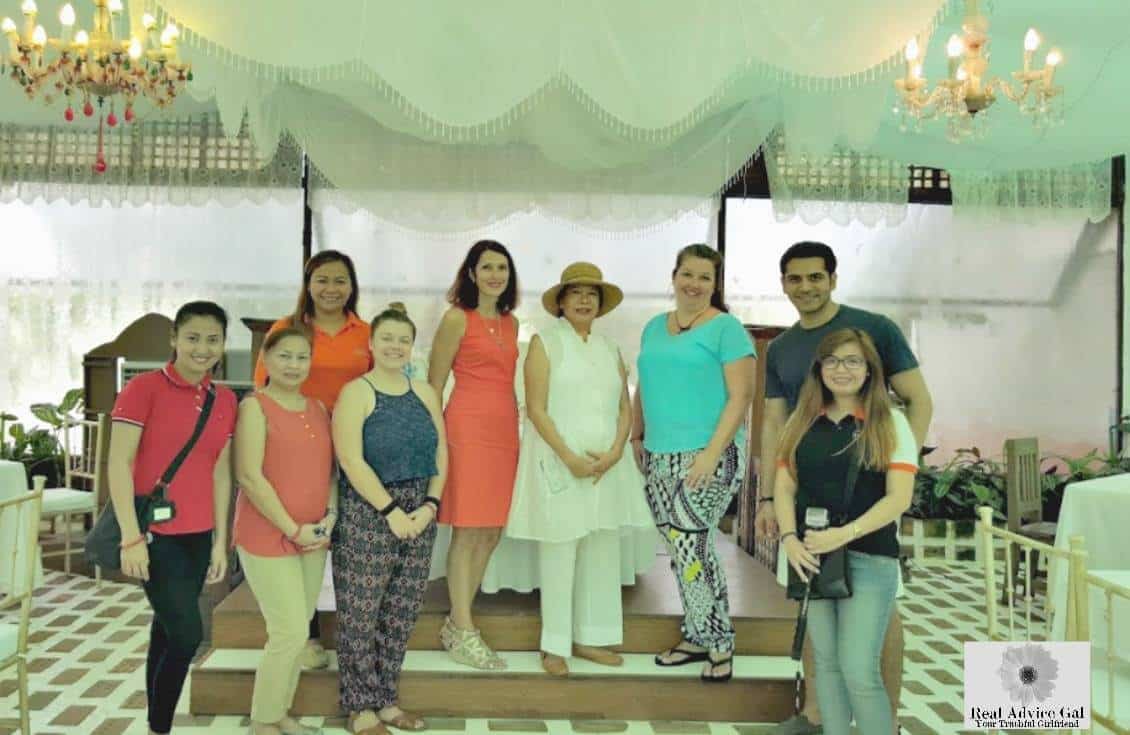 Sonya the owner of  Sonya’s Garden located in Tagaytay, Philippines  was one of the first people we met on our journey. She is the creator of an English Garden oasis. The garden should be called secret and special because of their unexpectant loveliness and their location. The owner and hostess created a place like no other. She wanted to nurture the Earth and change her community. Her personal home transformed into a thriving business built with her legacy of giving. 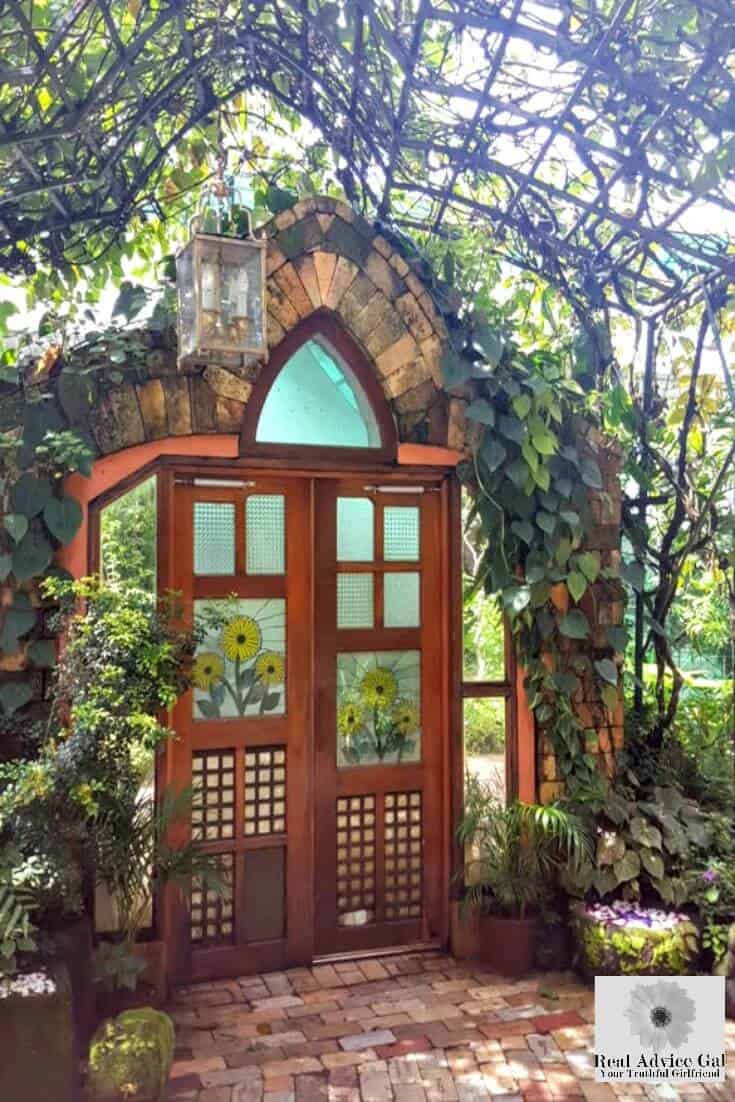 Sonya is an innovator and entrepreneur but it isn’t her business which employs 150 people, it is her compassion that I was drawn to like a child to a new ride. We had the honor of meeting her and were taken down the path into the explanation of how Sonya’s garden came to be. She is studying the art of doing nothing. She encourages just being. 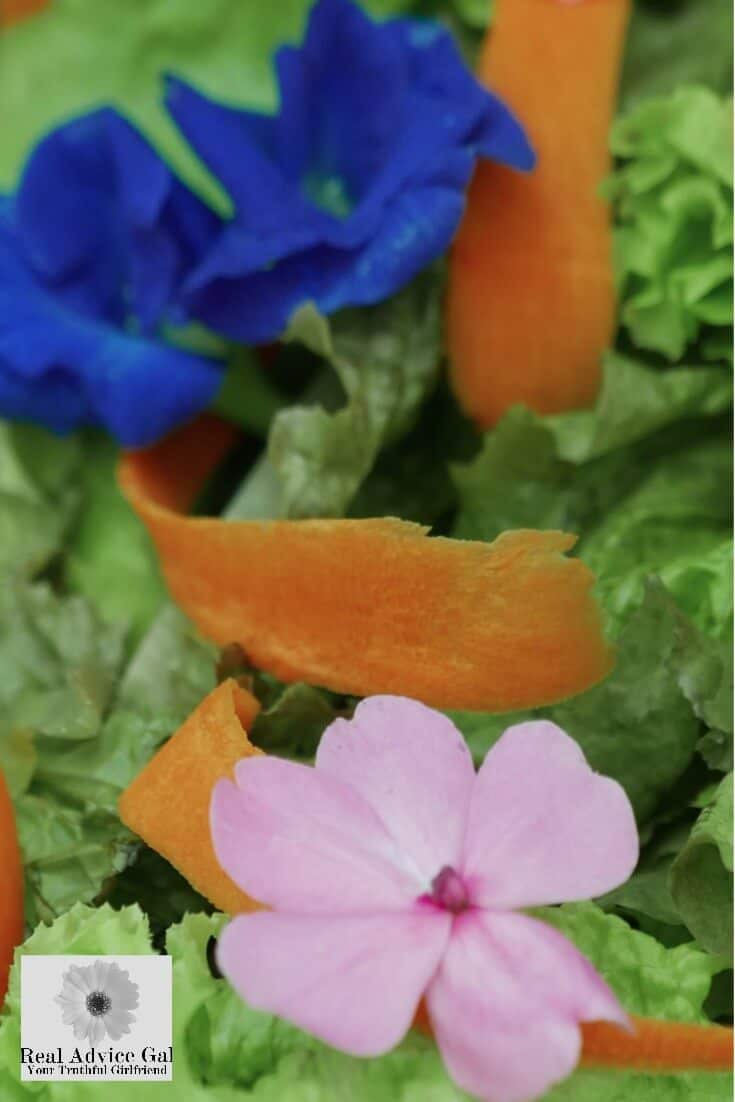 She opened her home to teach her fellow citizens how to live well. She began by growing food and flowers. She even grew flowers that are food.
Then she began to hire her neighbors and teach them how to do and be more. She showed them the power of a hard day’s work and how there was an answer to the poverty that used to inflict them. She taught them skills that have changed the course of their families forever. She was the rock in the ocean that created life changing ripples of cresting waves. She found a way to not only share her love for nature but her love for humanity by not only creating but teaching others how to care.

Our Journey continued to TAAL 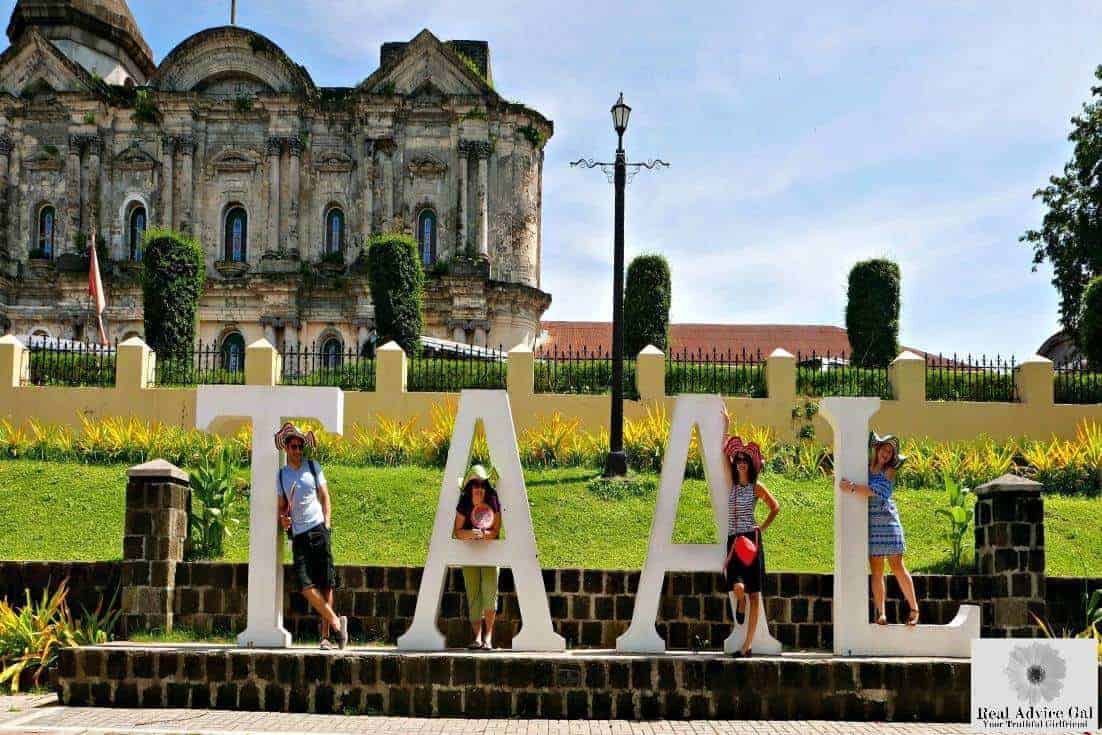 This is Rahul from plushplaza.com, Gina from vacationmaybe.com, me, Amee from right here on Real Advice Gal, and Eva from Evaexplores.com. 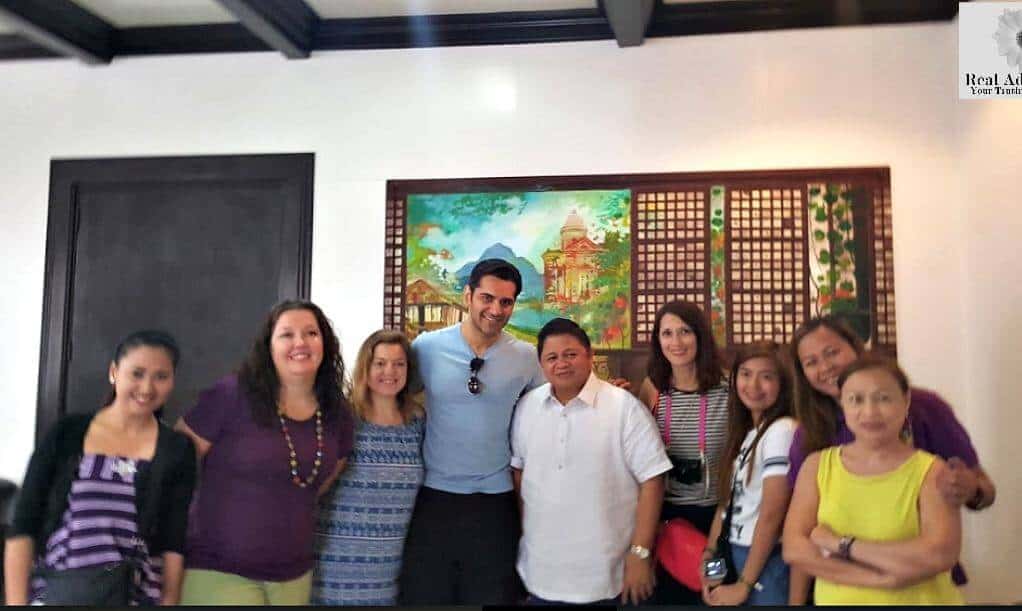 We met the mayor while in TAAL. Fulgencio “Pong” Mercado was the Vice Mayor for many years. He was very attentive and informative. I could tell he had a great love for his town and his country. It was a pleasure sharing a snack with him.
For his first term, Mayor Pong has a lot of great plans for Taal or also known as “The Heritage Town.” He advocates cleanliness especially in the town’s public market and has started coastal clean-up. He also pushed for projects that will promote Taal made products. Not only that but he also made sure that there are livelihood projects for his constituents like candle making, peanut butter making, dress making and making of novelty products. Aside from that he also supports a lot of other projects that will benefit his municipality. 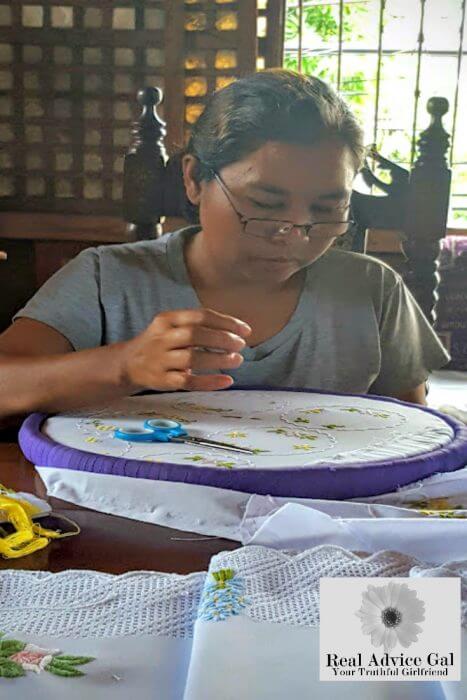 We met the ladies who make such beautiful artwork at our Tour at Burdang Taal Demo
Burdang Taal.  Embroidery tradition found in Taal this is one of its classic designs is the callado, where the thread of the cloth is pulled apart, resulting in a fine, filigreed lattice, which beautifully complements and enhances the three-dimensional, embossed forms of Burdaang Taal embroidery. I found it fascinating that these ladies make a couple of dollars a day doing this. They do this so they can stay busy and make enough money for the extras in life like sugar. I am in love with my table runner and the fact that these ladies are able to continue a tradition in their culture. I like their work ethic and commitment to their cultural heritage. 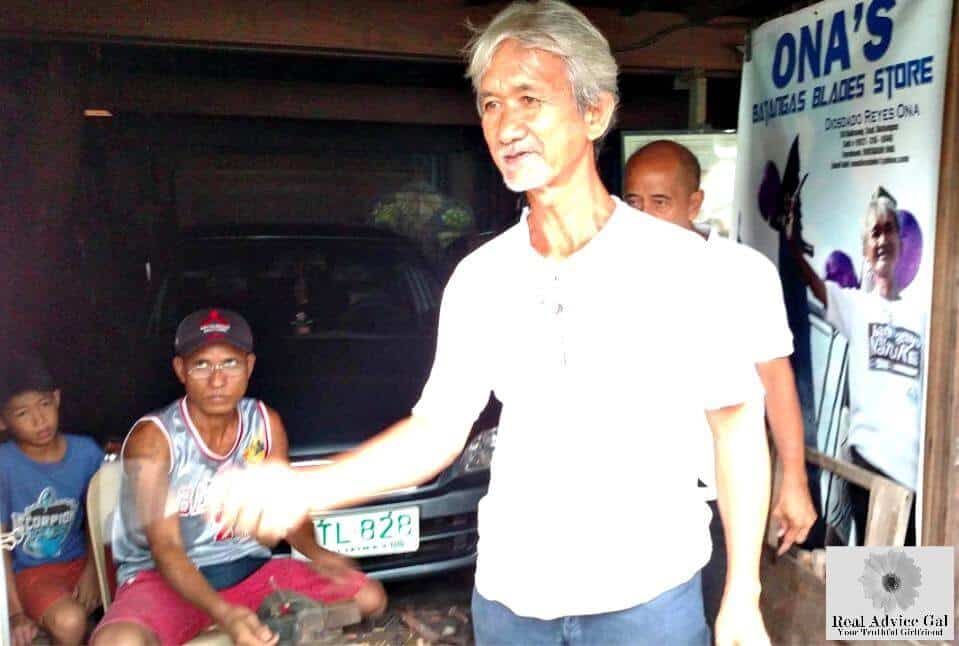 Then we met the man who crafts the knives at the Balisong Shop with Taal producing some of the fiercest revolutionaries and citizens, it is befitting that Taal is also the Balisong Capital of the Philippines! According to history, the balisong’s roots can be traced back to as far back as 800 A.D. Its ancestry can be linked to one of the ancient weapons used in Kali, a fighting art system of Malaya-Polynesia. The art of Balisong making began in the Philippines around 1905. It was invented as a deadly weapon by Perfecto de Leon. It has become a famous internationally known product of the Philippines. The owner at Ona’s shop is known around the world for his expertise and his Balisong. 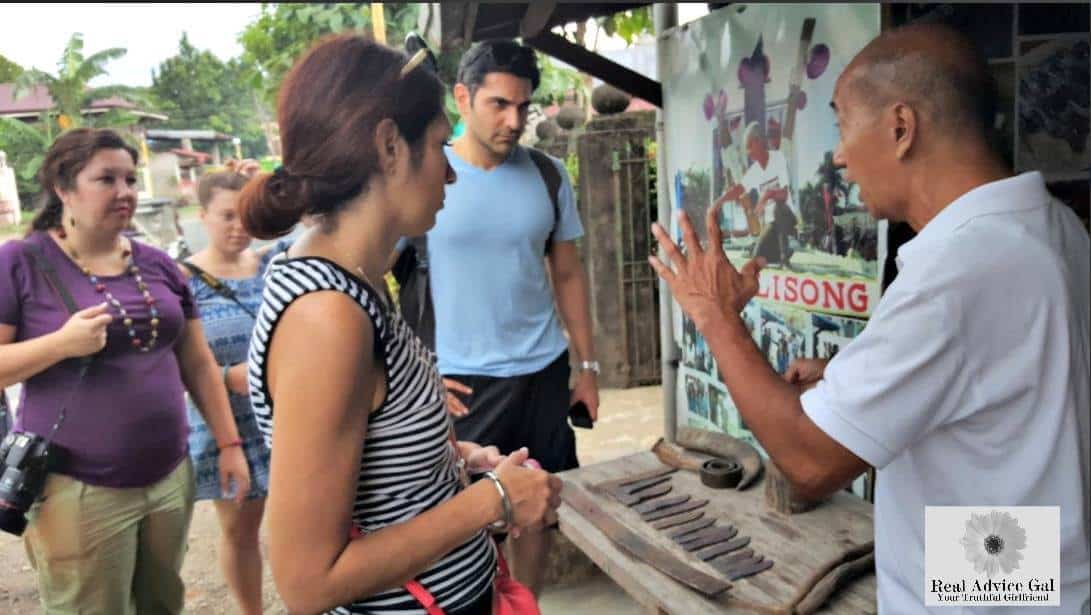 We met our guide Dindo, who showed us around. He shared a little bit about his life. I was struck by his commitment to his family. He was telling us how he is honoring his aunt by living in her home. Then he shared how he was going to throw a very traditional wedding for a family member. I was grateful for the time he spent with us sharing his culture and his unique identity. 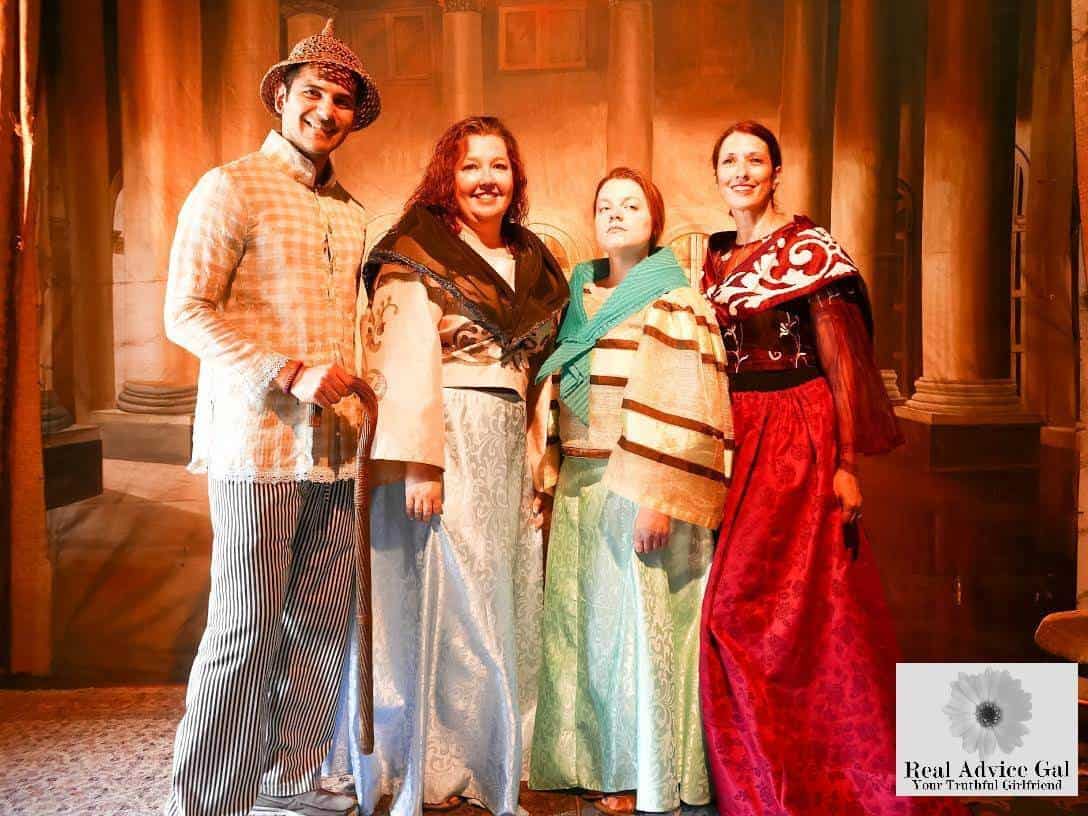 In our journey, we met one another. We became part of each other’s stories. We touched, talked, dined, and explored. The best part is we shared who we are. We became the little girl that wanted to say hello to a new person, experience, and culture and we left better for it.
I’d like to send my big thanks to the Tourism Promotions Board of the Philippines (TPBPHL) for their warm welcome and hospitality and for our awesome Southern Luzon’s Heritage, Wellness and Culinary Trail tour as part of TBEX Asia 2016 conference.
Read more about our trip to the Philippines:
10 days, 5 hotels and 2 unwanted guests
Filipinos are just too sweet and it is killing them
15 steps to fantastic international table decor that you can create even with a limited budget