I am always looking for ways to save money and use up things I have in my house to make dinner. I knew last night that today was going to be a long day and I would not want to trying to figure out what I could make for dinner . I figured I would plan ahead and took a look around my kitchen. I found I had 2 loaves of bread that were a few days old but not moldy. I hate throwing away food so I decided French Toast was in order. We are in the middle of a near winter freeze and the stove being on would help to add warmth to the house. However, I knew I would not want to be standing over the stove making 2 loaves of French Toast. I have a teenage son so yes I would need almost all of that. I decided to whip up a French Toast Bake and have it ready to throw in the oven today. It smelled so great it filled up the whole house and no one was complaining about the extra heat with the temperatures dropping to -35 tonight. 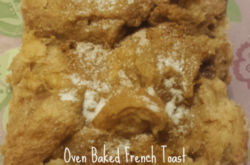 I don’t use metal baking pans but use stoneware so when I remove the Oven Baked French Toast from the refrigerator I place it in the oven before the oven has pre-heated. This way while the oven is slowly warming up, the stoneware warms up as well so it doesn’t break. If you put a cold glass or stoneware in a hot oven it can cause it to crack so you want to bring it to room temperature first or let it warm up with the oven. Since I don’t want the food going bad and I don’t have a lot of time to waste, warming it up with the oven is the easiest way to go.

This recipe is great for breakfast as well as dinner and would be an excellent choice for a Brunch. Serve your Oven Baked French Toast with this Easy Hashbrown Casserole  and Cinnamon Roll Fruit Cups for a full balanced meal. If you are looking for an elegant dessert you could try this Easy Cupcake Recipe for Champagne Cupcakes.

Do you make Oven Baked French Toast? What do you add to make it extra special?