Why I had the Gastric Sleeve Surgery

Why I gave up dieting and had the Gastric Sleeve Surgery 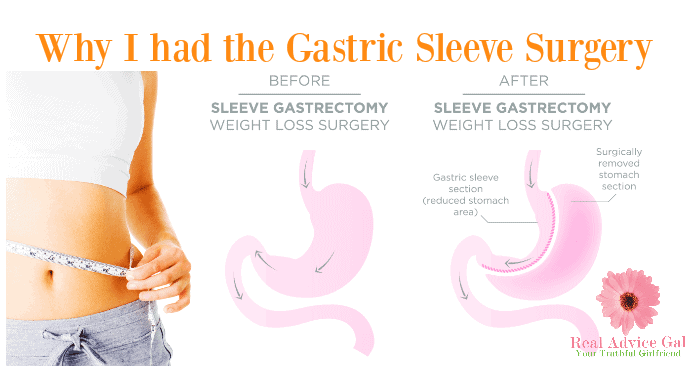 I have struggled with my weight as fast back as I can remember. I was never a skinny person but growing up I wasn’t heavy either until about Junior High. The weight piled on and it was after college that I really seen myself as fat. Yes, I said fat. I am not hiding behind words such as overweight, pleasantly plump, husky, or big boned. Over my teenage years I would alternate between starving myself and binging and purging. I never got skinnier instead I gained even more weight. When I am honest with myself I see that I was OBESE. Thru my journey to the Gastric Sleeve I have learned to be honest if I am going to change.

When I was in my early 20’s I decided that I wanted to change and I set out on a drastic path. I worked out 2 hours a day and never consumed more than 1000 calories. I lost 60 pounds and was happy but I always seen my flaws. At times I would stumble back into my old habits of starving or purging.  When I was feeling good I reveled in clothes shopping in “normal stores” and the attention I seemed to gain because all though I lost weight my “chest” stayed a DD!

The weight gradually came back on and I have struggled for the past 9 years to lose the weight. I tried fad diets, weight watchers, and even caught myself reverting to my old habits, again. I started working out last summer doing Water Aerobics and Curves but no matter what I did the scale never budged. One day a light bulb came on and I realized that at 34, 5′ 3″  and 260 pounds I needed to do something. I was missing out on so much because I was always tired or wore out super easy. I attended a seminar on the Gastric Sleeve and other Gastric options and a week later had my first appointment.

My insurance said they would cover the procedure but only after 6 months of documented weight loss. So I started going to the Weight Loss Clinic at my local hospital and began the 6 month process. I would like to say during that time the weight left but I would yo-yo up and down for almost 6 months. I began to get discouraged until I realized that even though the scale was not moving my mindset and thinking process was changing. I was cooking more at home,we were eating fast food a lot less, my daughter’s snacks became healthier, I was mindful when ordering at restaurants, and I even began trying new food flavors that I had shunned in the past.

I had my Gastric Sleeve Surgery on April 5, 2013. My weight that day was 246 pounds. After only 6 weeks, I am down to 214 pounds. I still have a long way to go but after going to Cedar Point this weekend I realized once again why I made the right decision. I fit in the rides and made it for 2 days keeping up with my 14 year old and 9 year old. They were asking me to take breaks not me asking them. I was even able to step in and help a pregnant mom who couldn’t ride a ride with her boys and they were too small to go alone. I was worried but excited that I was able to help and I fit in the ride below.

I have a long road ahead of me and I will never be in the clear but with the Gastric Sleeve I gained a step in the right direction. It will be at least 1 year before I am even at my goal weight and now begins the part of strength training to ensure that I build muscle mass instead of losing it. With my surgical clearance and everyone’s blessing,I am ready to begin the next step in my recovery after my Gastric Sleeve Surgery.