Can You Eat Sprouting Potatoes? 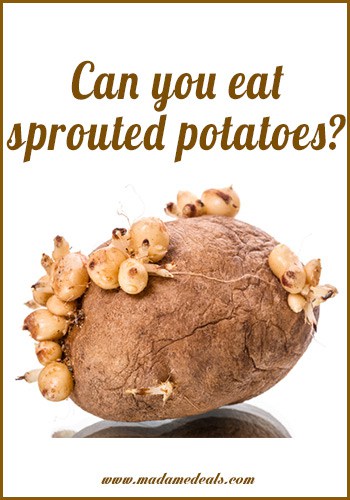 The other day I was cleaning out the cabinet where I keep the potatoes and I found a couple of forgotten spuds that had sprouted. My first reaction was to laugh, because I have a good friend that is terrified by sprouting potatoes and I immediately thought of her. If she would have been there that day, she would have ran screaming from the kitchen. I have no idea why they scare her so badly, but they do and they have since we were little kids.

When I finally stopped laughing, I started thinking about those little sprouted potatoes that were currently sitting on the kitchen counter. Normally, I throw them away, but do I really have to? I have heard that when a potato sprouts it is poisonous and can make you sick or even kill you. Was that just an old wives tale or did I actually have some homicidal potatoes on my hands?

So, before I tossed them in the trash, I called upon my very dear friend, who knows just about everything about anything!

Can You Eat Sprouting Potatoes?

Google, I said, what can you tell me about these sprouted potatoes? And as usual, my good friend had all the answers. It turns out that yes, these sprouts do contain toxins that can make you ill, but it seems you would have to eat the sprouts and a lot of them for this to happen. If the sprouted potato is very soft and wrinkled, the best thing to do is throw it away. If the potato is still smooth and firm, you don’t have to throw it away. There are a few things that you can do to salvage those potatoes.

Some people use sprouted potatoes to grow more potatoes. I have never grown my own potatoes, but there are so many simple tutorials online that make it look pretty easy to do. If this is something you may want to try, do some research and pick the way that you think will work best for you. You may never need to buy potatoes from the supermarket again!

If you have a great potato recipe, this is the time to use it. Cut off the sprouts and use the curved end of your peeler to go a bit under the skin and remove a little bit of the potato flesh. Then, proceed as usual with your recipe. Some great recipes to use up your potatoes are potato soup, scalloped potatoes, potato salad, mashed potatoes, french fries or twice baked stuffed potatoes. Make sure you use the ones that sprouted right away to avoid further sprouting or any decomposition of the potato.

Potatoes are versatile and delicious. You can do so many different things with them, but I still wouldn’t want to eat them with every meal I have. So, if you have lots of sprouted potatoes and you won’t be able to use them all at once this is what you do. Cut off the sprouts and depending on what they will be used for you can either bake them, or you can peel them and boil them. When they are cool put the baked potatoes in freezer bags and into the freezer. For the boiled ones, you can chop or grate them when cool and then freeze them in freezer bags. When you are ready to use them in a recipe just grab a bag out of your freezer and you’re ready to go.

From now on, when you find those sprouting potatoes in your cabinet, stay calm!

There’s no need to run screaming and unless they’re mushy, there’s no need to waste money by throwing them away. And, if you want to try a new potato recipe instead of the old standbys, here are some: 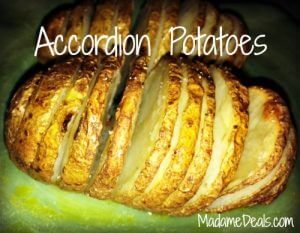 Karla’s Korner: Lessons in Living an Ordinary Life How to Get Rich In 5 Minutes a Day